Astoria Dispatcher Melanie Kinney received a Notice of Recognition from Police Chief Geoff Spalding at yesterdays command staff meeting. Dispatcher Kinney was cited for superior performance of duties for her work involving a multi-agency pursuit and arrest of a suspect. The citation appears below:

Early Monday morning November the 6th, Dispatcher Melanie Kinney had just begun her morning shift when a traffic complaint was received by Seaside 9-1-1 reporting an erratic driver on Highway 101 approaching Seaside. State Police had no units in position so the information was relayed to Seaside Officers. The vehicle was soon spotted by a Seaside Officer as it was speeding through town. The Officer attempted a traffic stop on the vehicle which failed to yield and in fact began to attempt to elude the Officer. As it was still dark outside and raining heavily the Seaside Officer wisely ended the pursuit shortly after the suspect vehicle passed the high school in excess of 80 miles an hour.

Seaside then notified Astoria 9-1-1 regarding the last known direction of travel of the suspect vehicle. Shortly after Seaside ended their pursuit the vehicle was once again observed speeding northbound on highway 101 by a Deputy who also attempted a traffic stop only to wind up in pursuit of the vehicle as it continued northbound in excess of 125 miles per hour. As the pursuit continued the Deputy was soon joined by an Officer from Warrenton Police.

The pursuit was now headed for Astoria across the Young’s Bay Bridge. As the suspect approached the city it was going much too fast to negotiate the round-about, the vehicle struck the curb exiting the bridge knocking off a front tire. The vehicle continued on with a shower of sparks coming from the rim as the suspect managed to keep up its high rate of speed.

Astoria Police successfully deployed spike strips about a mile after the vehicle struck the bridge, further disabling the vehicle. The suspect continued towards the downtown corridor, nearly crashing into a nearby restaurant when he suddenly jumped out and began to run. After a foot pursuit that continued for several blocks, officers had the suspect in custody.

When the rush of the incident and identifying the suspect was over, Dispatcher Kinney started to investigate into the vehicles owner, as the suspect was not the registered owner. She called the registered owner on the return, only to find out he had sold the vehicle many years ago to a dealership in Washington. Looking into the VIN, she was able to determine the exact dealership the vehicle was sold to. It was with that information that they were able to find out that the vehicle had been purchased with two credit cards that were subsequently reported as stolen.  Because of her tenacious investigative work Dispatcher Kinney took a convoluted incident and laid the groundwork for officers to follow up on. Dispatcher Kinney kept calm and cool during the pursuit and continued the hard work even after the excitement had ended.

Dispatcher Kinney’s  ability to remain calm and professional during this multi-agency pursuit is to be commended and is in keeping with the highest standards of Public Safety Dispatching. 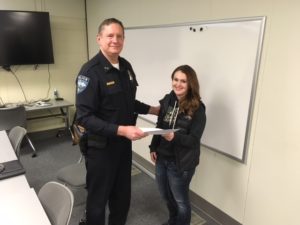