Astoria 9-1-1, in conjunction with Astoria Fire Department, Astoria Police Department and Medix Ambulance, would like to invite you to come visit us at the annual Trick or Treat Downtown Astoria on Wednesday the 31st. We will be in front of the Liberty Theater handing out Halloween bags. What started out several years ago with just 50 bags has grown to a tradition of 750 bags!

We hope to see you all there!

On 10/17/2017 at about 10:23 a.m. Ruben Martinez was located safe after walking up to a residence near mile post 7 on Highway 202. The property owner contacted authorities and Martinez was reunited with his family.  The Astoria Police Department wishes to thank the Clatsop County Search and Rescue team the Astoria and Warrenton Community Emergency Response Team (CERT) as well as members of the public who called in possible sightings, hung up fliers and offered assistance to locate Mr. Martinez.  “This is the way we like to see these situations end. Said Deputy Chief Eric Halverson, the concern and support shown by our community partners is what makes Astoria such a great place to live.”

On 10/16/2018 at about 7:13 PM Astoria Police received a report from family members, that 76 year old Ruben Rodriguez Martinez did not return to his residence in the 100 Block of Duane Street.  Mr. Martinez was last seen today near his residence at around 10:00 AM.  Mr. Martinez reportedly has early onset Alzheimer’s.   He has a history of walking around town and in Astoria neighborhoods then he returns home or is picked up by family.

Ruben Martinez is reported to be 6’00” tall and weighs approximately 150 pounds.  He was last seen wearing a hat with the Mexican flag on it, gray jacket, black jeans and black shoes.

A copy of the missing flyer can be found here: APD Ruben Rodriguez Martinez –

On  10/03/2018 at about 10:45 PM Astoria Police were contacted by an Astoria Port Security Officer advising that he had just had contact with a man who said he was wanted but if the police tried to arrest him it would end in a standoff.  An Astoria Officer arrived to make contact with the man near West Marine and Bay Street.  The man, later identified as 37 Year old Michael Douglas Hathaway reportedly concealed an object and refused to stop for the officer.  Hathaway then produced a dirk style knife and told the officer, he would have to shoot Hathaway to take him into custody.  Additional Officers from Astoria Police Department responded to assist with the apprehension of Hathaway who was given repeated commands, which were repeatedly refused, to drop the knife.  Officers continued to speak with Hathaway who after several minutes of negotiation, dropped the knife and allowed himself to be handcuffed.  Hathaway was initially transported to Columbia Memorial Hospital after telling officers he had just ingested heroin prior to being contacted by police.  Hathaway was treated, then lodged at the Clatsop County Jail on the Utah Felony Warrant, as well as on local charges of Unlawful Use of a Weapon, Carrying a Concealed Weapon and Felon in Possession of a Restricted Weapon.

On 10/03/2018 at about 8:10 p.m. an Astoria Police Officer attempted to stop a vehicle driving North on 7th Street without headlights on.  The operator of the vehicle, later identified as 32 year old Tiffany June Richardson, reportedly accelerated away from the officer who was attempting to stop her.  The pursuit of the vehicle continued onto 8th Street, Jerome Ave and 5th Street, where Richardson came to a dead end.  During the short pursuit Richardson’s vehicle struck a parked vehicle causing minor damage.  Richardson was taken into custody without further incident on charges of Felony Eluding, DUII, Hit and Run and Reckless Driving.  She was lodged at the Clatsop County Jail.

Astoria—Officers from the Astoria Police Dept and community members will come together in an informal, neutral space to discuss community issues, build relationships, and drink coffee.

All community members are invited to attend. The event begins at 2pm on 10/10/2018 at the Blue Scorcher Bakery, 1493 Duane St., Astoria. Please contact Sgt Christopher McNeary with questions: 503 325-4411 or CMcNeary@astoria.or.us.

Coffee with a Cop provides a unique opportunity for community members to ask questions and learn more about the department’s work in Astoria’s neighborhoods.

The majority of contacts law enforcement has with the public happen during emergencies, or emotional situations. Those situations are not always the most effective times for relationship building with the community, and some community members may feel that officers are unapproachable on the street. Coffee with a Cop breaks down barriers and allows for a relaxed, one-on-one interaction.

“We hope that community members will feel comfortable to ask questions, bring concerns, or simply get to know their officers,” said SGT Christopher McNeary. “These interactions are the foundation of community partnerships.”

Coffee with a Cop is a national initiative supported by The United States Department of Justice, Office of Community Oriented Policing Services. Similar events are being held across the county, as local police departments strive to make lasting connections with the communities they serve.

The program aims to advance the practice of community policing through improving relationships between police officers and community members one cup of coffee at a time.

On Wednesday October 3rd, 2018 at 11:18 am, the Federal Emergency Management Agency (FEMA) in coordination with the Federal Communications Commission (FCC) will be conducting a nationwide test of the Integrated Public Alert and Warning System (IPAWS). This test was originally slated to occur September 20th, however due to significant weather events in South Carolina and North Carolina, FEMA opted for their backup date of October 3rd. 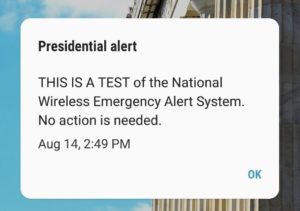 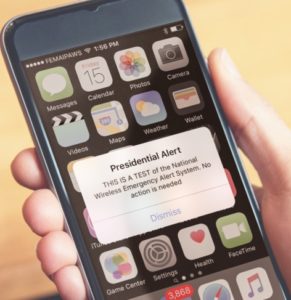