On 07/19/2018 at about 1:14 PM Astoria Police Department, Astoria Fire Department and Medix Ambulance were dispatched to a report that a vehicle had driven off of Pier 39 into the Columbia River.   The US Coast Guard was also notified and launched a rescue helicopter.   Upon officer’s arrival, Good Samaritans were waiting with a 23 year old Portland Ore, woman who swam from the vehicle.  Authorities were advised by the woman that no other people had been in the vehicle at the time of the incident.  US Coast Guard rescue swimmers did a cursory search of the vehicle and did not locate any other occupants.  A second team of divers were able to conduct a more thorough search and confirmed there were no other occupants.

Both witness statements and conversations with the woman indicate that she intentionally drove off of the pier and was suffering from apparent mental health issues.  The woman appeared uninjured but was transported to Columbia Memorial Hospital as a precaution and for mental health evaluation.

The vehicle will be removed from the river by a Coast Guard Contractor.  Due to the intentional nature of this incident, reports will be forwarded to the Clatsop County District Attorney’s Office to determine if criminal charges will also be filed. 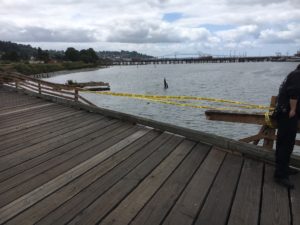 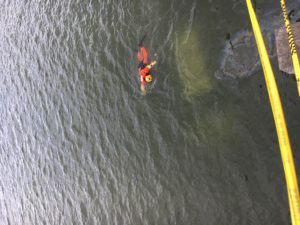