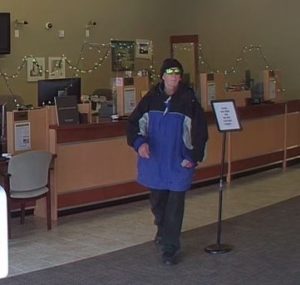 te male subject estimated to be in his 50’s – 60’s entered the bank and presented a note to the teller, leaving with an undisclosed amount of money.  The man is described as wearing black beanie hat, mirrored sunglasses, black and blue rain jacket, and black footwear.  He was last seen leaving the area on 10th Street towards Marine Drive.  Anyone who may have seen the individual in the vicinity before or after the robbery is asked to contact Astoria Police Department at 503-325-4411, or Detective AJ Duryea at 503-298-2533, aduryea@astoria.or.us.