The Oregon Associations of Public Safety Communications Officials (APCO), and the National Emergency Number Association (NENA) membership held their annual awards banquet to recognize some of the extraordinary work done by Oregon’s 9-1-1 Dispatchers. This year the ceremony was held in Bend Oregon.

A local Astoria 9-1-1 Dispatcher, Kristen Sodervick was one of those recognized with the awarding of a State Critical Incident Award.

Also recognized, though not receiving a State Level Award are Astoria Lead Dispatcher Jennifer Peden and Operations Supervisor Candace Pozdolski. Both received letters of recognition for having been submitted for award consideration. Jennifer and Candace were both recognized for Critical Incident award submissions. Jennifer was further recognized for a Hearts of 9-1-1 award submission for her work on the annual Halloween bag distribution.

At the State level, Dispatcher Kristen Sodervick was awarded a Critical Incident award. The citation appears below. 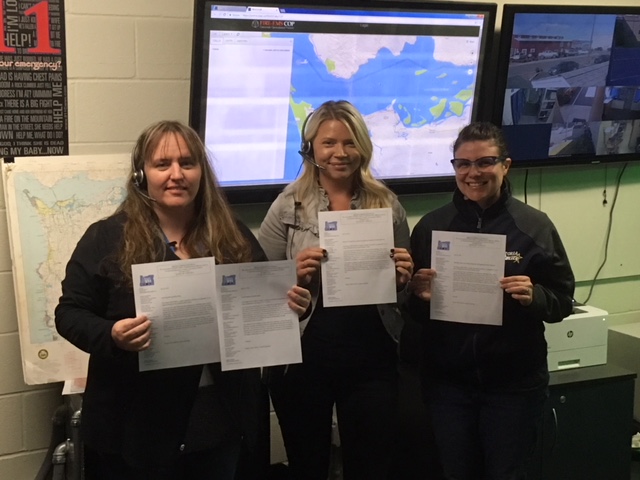 On the 6th of July 2017 at 1358 hours, Dispatcher Kristen Sodervick received a call from the Coast Guard reporting one of their helicopters spotted a brush fire, and gave coordinates in latitude and longitude. Kristen plotted these coordinates and toned out Warrenton Fire as well as the Oregon Department of Forestry. Given the remote location, off of Delaura Beach road, additional units from Warrenton Police as well as the Clatsop County Sheriffs responded to help locate the fire.

With numerous Fire and Law Enforcement units flooding the area, the only thing that was located was smoke. The active sources location was turning out to be very elusive. Kristen called the Coast Guard back and requested an over-flight by the Coast Guard Helicopter again to help locate. Unfortunately, the aircraft was already on the ground and needed re-fueling.

This did not deter Kristen. Thinking outside the box she called the Bar Pilots, and was once again told they could not authorize this as their Helo was on contract, though they would give her the Contractors phone number. Kristen then called the Contract Pilot, and after trying was finally able to get a Helo to conduct an over-flight.

By this time the surrounding areas of Camp Rilea, Delaura Beach and Fort Stevens had been checked and still the First Responders were unable to locate the source of the fire. Kristen coordinated communications between units on the ground and the Bar Pilots Helo, which proved ineffective so she assumed communications relay duties between the aircraft and Fire units. Kristen had the Helo hover above the active fire so that units on the ground could get a better location, and plot a course in through the thick Junipers and underbrush.

Kristen’s logistical support, and correct decision making coupled with her tenacious follow through, allowed for various disparate units to come together in a cohesive effort to locate and extinguish this fast burning fire.

The first ODF Engine to attempt to reach the scene, became stuck and was rendered out of service. Kristen then toned out Lewis and Clark Fire and had Seaside tone out Gearhart Fire for Type 6 Brush Engines.

By the time the Fire Units were returning Kristen had coordinated units from:

Kristen’s decision making and coordination skills under these unusual circumstances is to be commended, and in in keeping with the highest standards of Public Safety Dispatching.

These awards are very competitive, the very fact we had several personnel in consideration speaks volumes for some of the outstanding behind the scenes work these Dispatchers do every day. They truly are the gateway to emergency services and must make quick and correct decisions each and every time. I could not be prouder of them, said Manager Jeff Rusiecki.

Our public safety dispatchers are a critical element in the delivery of life-saving services. This recognition by APCO-NENA is a validation of the excellent work all of our dispatchers do on a day-to-day basis.    Congratulations to Dispatcher Kristen Sodervick, Lead Dispatcher Jennifer Peden and Operations Supervisor Candace Pozdolski for another job well done, said Chief of Police Geoff Spalding.