On 06/03/2021 at 8:52 PM, Astoria Police Department responded to a report of a Robbery that had just occurred at Mini Mart East, 2264 Marine Dr. Astoria.  It was reported that a white male suspect wearing a white bandana on his head, a white face mask, sunglasses and a dark colored jacket entered the store and presented a demand note to the clerk and left with an undisclosed amount of money.   A witness who was in the parking lot saw the suspect run North on 23rd Street towards Commercial Street and then towards the Riverwalk.  The witness identified the suspect as Calvin Proctor, a 29 year old Astoria resident. 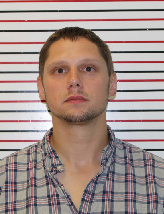 Efforts to locate Mr. Proctor have so-far been unsuccessful.  Anyone who knows Mr. Proctor’s whereabouts are asked to contact the Astoria Police Department at 503-325-4411.