On 06/28/2019 at 11:35 hrs. Astoria Police responded to a report of a man with a gun who had been trying to steal beer from Small Stop 76 Station, 180 Marine Drive, Astoria. On arrival it was learned that the man identified as 21 year old Nicholas Michael Strange of Olympia Washington had entered the store and reportedly hid beer under his shirt. When confronted by an attendant 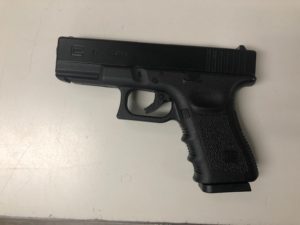 at the business, Strange reportedly began to struggle with the attendant. During the struggle another employee called police and noted that Strange had what appeared to be a handgun tucked into his pants. On police arrival, attendants and some citizens had Strange pinned to the ground. Strange was taken into custody for Robbery III without further incident. It was determined that the reported handgun was a look-a-like to a Glock handgun with the same type of manufacturer markings. The gun turned out the be a pellet gun. “Though the gun was not utilized by Strange in the taking of property it turned an already tense situation into one that was more dangerous for everyone involved, including Strange”, said Deputy Chief Eric Halverson. “There was no way for the employees at the store or our officers to know the gun wasn’t a deadly weapon.” Halverson said.

Strange was lodged at the Clatsop County Jail on Robbery III charges.